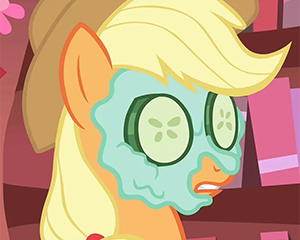 It even works on ponies!
"You want to know a big secret? The cucumber does nothing! Heh, this is something we make up."
— Paolo, The Princess Diaries
Advertisement:

Cucumbers and facials, they just go together in fiction, apparently. Whenever a character is shown to be getting a high-class spa treatment (that is probably really expensive), getting a comprehensive makeover, or is so fussy about their appearance that they give one to themselves at home, it's usually indicated by the character having a Cucumber Facial.

The facial mask is usually green, mud-colored or sometimes blueish, and may cause men to run screaming about a scary monster. The slices of cucumber will be carefully placed over the eyes, though their purpose isn't readily apparent. Often what the point of the cucumber is will be lampshaded, or someone will pick the cucumber off the person's face and eat it For the Lulz.

The cucumbers are Truth in Television, incidentally. Their real purpose is that they are a natural moisturizer and astringent, and can help with puffiness around the eyes.

Usually this is Played for Laughs. Also see Women's Mysteries or Cosmetic Horror for how most men view the practice, unless one is getting it done himself. Has nothing to do with the other kind of facial.

A variant; King and Queen have cucumber slices on their eyes simply for relaxing.

A variant; King and Queen have cucumber slices on their eyes simply for relaxing.