In Touch with His Feminine Side 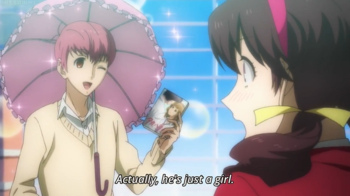 So feminine, he must've turned into a girl.
"Men get pedicures! Or what was all this equal rights talk all about?"
— Rogelio, Jane the Virgin
Advertisement:

Both genders have their stereotypical roles in society — to prove it, you can read up on them in the Gender Dynamics Index — but society has come a long way, and characters that subvert expected gender roles are on the rise, becoming more accepted and even popular. The Tomboy in Tomboy and Girly Girl might have been ridiculed in the past, but now she is mostly accepted along with her more "feminine" counterpart, at least up to a certain point (there is still a certain point at which tomboys are no longer considered acceptable if they are seen as too masculine). The Sensitive Guy in Sensitive Guy and Manly Man is somewhat arguably less socially acceptable in its extreme forms (Double Standard strikes again, more severely this time, due to most Western societies, particularly the United States, placing greater emphasis on masculinity over femininity) and may subvert gender norms, but characters which embody this trope are no less interesting than any other. There are generally two types of sensitive guys, depending on their degree of femininity vs. masculinity:

Between the two types of sensitive guys, the tomgirl is considered somewhat more socially acceptable than the girly boy. Keep in mind that our views of gender have actually changed over time, and some traits which now might be considered masculine or feminine, actually weren't in the past, so this is mostly only valid for modern characters. Also, people are different, and even characters who are unquestionably "manly" might have a few of these traits. Like tomboys, tomgirls aren't necessarily gay, they're split into three types, such as straight, gay, and bisexual. More often than not, however, tomgirls are usually straight. Girly boys, however, more often than not, are usually gay.note Keep in mind that "tomgirl" can also mean "male crossdresser", and in that case, they usually are gay or bi.

The outcome of the Sensitive Guy's character arc tends to indicate the intended Aesop. If the Sensitive Guy doesn't "grow out of it," or find his inner masculinity, this suggests that gender and sexuality boundaries are more permeable and that transgressing these boundaries is acceptable. If, on the other hand, a Sensitive Guy is often hard to be normalized in some way, this implies that his feminine appearance or traits are always problematic. Consequently, the feminine traits of his can serve as an exploration of gender and sexuality. Also like when the media, more often than not, usually portrays the type 2 effeminate tomboy as the "better" type of tomboy, they more often than not usually portray the type 1 tomgirl as the "better" type of sensitive guy.

Keep in mind that the term effeminate can also be used to describe tomboys who are relatively more feminine than other tomboys, at least in terms of appearance and/or personality, even if their interests may still be fairly masculine, but relatively effeminate tomboys typically also have a sizable portion of feminine interests as well.

The "Sensitive Guy", "Tomgirl", or "Girly Boy", while not being exactly embraced by males, is very popular with females, possibly for the same reason the Tomboy is popular with males. Girls identify with them more than they might other male characters, and may find them attractive based on shared interests, or find they are a better Audience Surrogate. Japanese slang often calls this character an "Onee"note from "Ane" (姉), since they can have the characteristics of a Cool Big Sis without biologically being one, although it tends to be shared with characters that enter the Camp side of femininity.

For the Distaff Counterpart, see Not Like Other Girls, One of the Boys, Butch Lesbian, and The Lad-ette. Often justified in universe with I Have Sisters. For similar tropes regarding ethnicity, see Pretty Fly for a White Guy and The Whitest Black Guy.