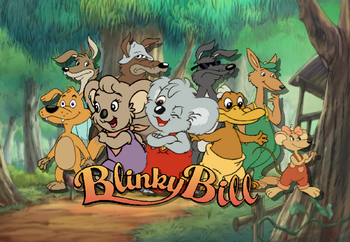 Good on ya, Blinky!

The main cast of the first two seasons:  Blinky's Gang and the Dingo family; from left to right: Shifty, Daisy, Nutsy, Meatball, Blinky, Danny, Flap, Splodge and Marcia. Not pictured: Wombo. For a full list of characters, go here.
Advertisement:

Blinky Bill is the anthropomorphic koala protagonist of an Australian book series written by author Dorothy Wall in the 1930s. The books inspired an animated series beginning in 1993, titled The Adventures of Blinky Bill, which was produced as a follow-up to the 1992 animated movie Blinky Bill: The Mischievous Koala. The animated series, by far the most well-known version of the character internationally, was produced by Yoram Gross and ran for two series on ABC from 1993-95 (the second series titled Blinky Bill's Extraordinary Excursion), with a third series (titled Blinky Bill's Around the World Adventures) airing on Seven Network in 2004.

The first season had the townspeople of Greenpatch (a fictional Australian bushland town and the main setting of the series) trying to rebuild their home (after it was destroyed by loggers in the 1992 movie), while coping with a family of playful tricksters and con artists in the form of the town's family of dingoes (who redeemed themselves by the end of the season). In the second season, Greenpatch is fully rebuilt and a story arc formed in which Blinky and his gang get lost while on a school camping trip and have to find their way home. The third season had Blinky, Flap and Nutsy leave Greenpatch and travel around the world in a hot air balloon/caravan with a gang of escaped circus animals, returning the animals to their proper homes while being chased by the circus' owners.

, with the third season available here

. For those in The United States and Canada, the first two seasons are also available to stream on Tubi TV here

The series got a CGI reboot in 2015 as a coproduction between Yoram Gross (under its new name, Flying Bark Productions) and Belgian animation studio Studio100 (who now also co-owns the rights to the original series with Yoram Gross/Flying Bark), starting with a theatrical film, which was then followed by a new series in 2016. Needless to say, fans were divided on whether going CGI was good at all, and even the new character designs were a point of contention.

Not to be confused with another series starring a koala named Blinky, although it could be argued that the name of the character in that series is a reference to this onenote , specifically the original books from the 1930s, as that series came out in '84.

Unless noted otherwise, this page fully focuses on the 1992-2005 animated series.

Tropes you'll see in the series: