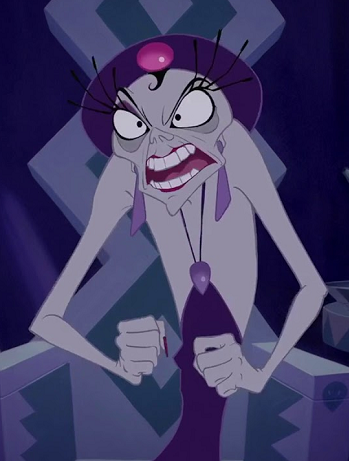 Nothing burns calories quite like evil.
"Yond Cassius has a lean and hungry look;
He thinks too much: such men are dangerous."
— Caesar, Julius Caesar
Advertisement:

Black robes not fitting properly? Just try being a little more evil! Kicking puppies is good exercise after all! And don't worry about those meals you skip while you're scheming to take over the kingdom. Yes, the combination of your new villainous lifestyle and the laws of narrative causality will make those annoying extra pounds vanish before you can say "Are they even feeding Yzma?"

Sometimes used for an explanation, where the villain is nasty and vicious because she's so hungry. Very common among fashion-oriented shows to explain why the size 0 model is so cranky. Another explanation may be that the villain is hopped up on some substance that ravages their body as well as their mind. This is more common among recreational "junkies" (like some of the more villainous hedonists and Crazy Homeless People, for example) than among villains who take Psycho Serum as a martial performance enhancer (in which case the drug is likely to make them brawnier, not skinnier).

Also, they can be the Thin in the Big, Thin, Short Trio when being an evil group to contrast with the fuller member and the squat member.

The reverse Villainous Glutton / Fat Bastard style is also relatively frequent (cf. Ursula, the Blob), but nowhere as lampshaded as the Lean and Mean look. Also contrast Large and in Charge. Particularly skinny or gangly-proportioned villains may qualify as Noodle People. Villainous Cheekbones often winds up overlapping with this trope.

When the hero is stronger and/or dumber, this often leads to Brains Evil, Brawn Good.