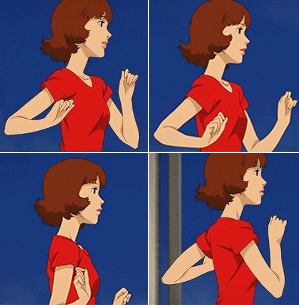 "You see? Never be late for a plane with a girl. 'Cause a girl runs like a girl, with the little steps and the arms flailing out... You wanna make this plane, you gotta run like a man! Get your knees up!"
— Jerry Seinfeld to Elaine Benes, Seinfeld, "The Airport"
Advertisement:

A gait particular to female characters (and sometimes used to mock effeminate males).

In the most exaggerated Girly Run, the upper arms are kept high and pressed against the sides in order to control "bounce". The lower arms do not swing freely, and the hands are held upright with the fingers delicately clasped or hanging rather than forming fists or the stiffly pointed position favored by proper athletes. Often she will flex her wrists. The thighs are held together, but the calves may windmill out slightly, giving her a knock-kneed look, and her feet are lifted straight up, as though she were marching. Additionally, she carries her back straight up from the hips to the shoulders, rather than bent forward into the run. In extreme cases, she may even lean back slightly.

Variants include wildly-flailing arms rather than tightly-clenched arms; carrying the arms down and slightly out along the sides, not really bringing them up at all; running only on the toes rather than striking on the front of the foot (the way a barefoot person runs) or on the heel (as someone wearing running shoes does); and flapping hands.

Obviously, this is not very efficient from a biomechanical perspective. Game characters with girly runs will often seem unreasonably slow. It puts the character at very high risk of breaking a heel.

You may notice that very few girls run this way in real life if they are actually trying to get somewhere fast, but there are a handful out there.