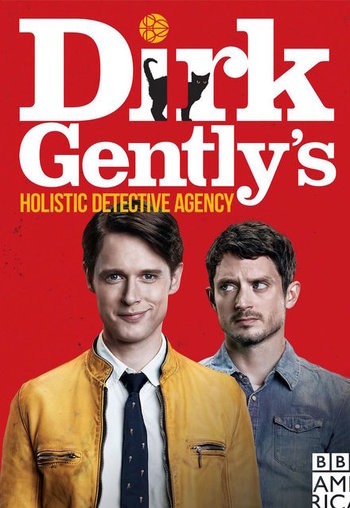 Everything is Connected.
Advertisement:

Dirk Gently's Holistic Detective Agency is a BBC America science-fiction detective series based on the Douglas Adams novel series of the same name. Written by Max Landis, it stars Samuel Barnett as the eponymous detective Dirk Gently and Elijah Wood as his reluctant sidekick Todd. The series is a co-production between BBC America and Netflix, with episodes airing on BBC America in the United States on October 22, 2016, and all episodes being available to stream on Netflix worldwide outside of the United States. Both seasons are also available on DVD.

Not to be confused with Dirk Gently, the other adaptation of the Dirk Gently novels.

Has a Character Page that needs some attention.

Todd and Dirk having different opinions on being friends in front of Amanda.

Todd and Dirk having different opinions on being friends in front of Amanda.