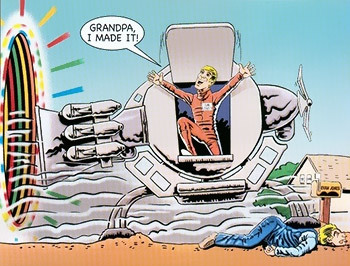 Rarity: How in Equestria is my travelling in time supposed to prove that time travel is impossible?
Twilight: I explained this Rarity. Travel back along a given time line can't be possible, because it could violate causality — do you know about the Grandmother Paradox?
Rarity: No.
Twilight: Suppose you travelled back in time to a point before you, and your parents, were born, and you killed your maternal grandmother... [...] But then she would never give birth to your mother, so you would never be born — so you could never go back in time to kill her — it's a paradox — see!
— My Little Pony: Friendship Is Magic fanfic Temporal Irregu-Rarity

The grandfather paradox is a type of Temporal Paradox. The name comes from the most famous variation, namely "what would happen if you traveled back in time and killed your own grandfather?" However, it also applies to anything that happens while time traveling that should logically make your original time travel trip impossible or unnecessary.

For example, if you killed your grandfather in the past, you should never have been born, and therefore you couldn't have traveled to the past to kill your grandfather. Destroyed the time machine? Okay, but how did you use said machine to travel into the past in the first place? Kill the evil overlord while he's a child? Then you shouldn't have any reason to travel into the past to kill him, because he never grew up to destroy your village and all.

Alternately, this whole snafu can be ignored outright if you're using Alternate Universe-style time travel, where the time period you came from is separate from (and unaffected by) any meddling you do in the past. The downside to this is that returning "home" might be a tricky matter....

If the universe runs on Stable Time Loop, this type of paradox is simply impossible, as all changes that will have been going to happen have "already" happened anyway, so you can't cause a change that will negate itself — something will have to intervene, no matter what or how.

This paradox doesn't stop you from traveling to the future and killing your future self and your offspring, however.

May lead to My Own Grampa, though in this case the person killed (probably) wasn't originally your grandfather anyway.