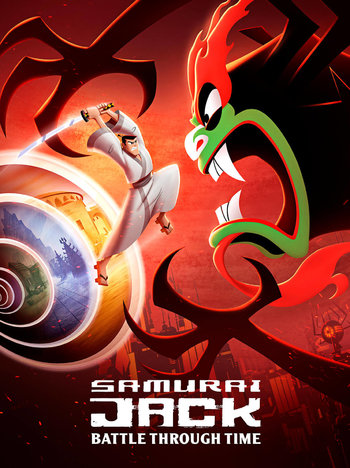 Samurai Jack: Battle Through Time is a video game developed by Japanese studio Soleil, based on the Cartoon Network / [adult swim] action franchise of the same name by Genndy Tartakovsky. The game was released on Playstation 4, Xbox One, Nintendo Switch, and PC (Via Steam) on August 21, 2020. It is considered canonical to the events of the animated series and serves as a companion piece to the Grand Finale that aired in 2017.

This game is a interquel that occurs during the events of the series finale. When Ashi creates a time portal in order for her and Jack to finally return to the past, Aku manages to intervene at the very last moment and traps Jack in an alternate dimension, a pocket locked between time where he relives a majority of his adventures and fights throughout the series. However, according to Aku, things aren't exactly what they seem to be, and the dangers contained in this new reality will stop at nothing to finish the samurai off. Jack seeks to escape from this alternate dimension, defeat Aku, and save the past, present, and future from his control once and for all.