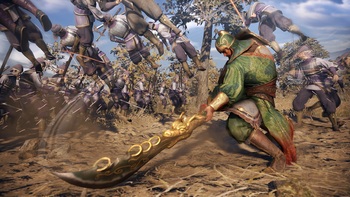 A Hack and Slash game is an Action Game that resembles a Beat 'em Up or Third-Person Shooter, but instead of beating up enemies with your fists or blasting them away with a gun, the main hero instead hacks and slashes away close-range melee weaponry. This genre also resembles a third-person Adventure Game whereby the hero has a goal to accomplish, but the real goal of the mission level is just to kill as many enemies as possible.

To increase the hero's casualty potential, the setting of the game may include large armies, and having the hero serving in one of them. Most of the enemies encountered on the field will be one-hit-and-they're-dead grunt soldiers, but occasionally, tougher bosses will show up, usually officers and generals.

Since randomly killing large groups of enemies can become boring, most Hack and Slash games will often incorporate other genre elements into their gameplay. For example, the game may include a multi and single-player Fighting Game mode wherein players can pick characters from the game and have them square up against each other in a tournament setting. They can also incorporate story modes which provide more of an Adventure Game feel. The Stylish Action genre is more or less an offspring of the Hack and Slash genre born out of making the fights as cool and awesome as possible (not to say that regular hack and slash games can't look cool and awesome, they definitely can).

Hack-and-slash games have roots in 1980s weapon-based martial arts Arcade Games, such as Sega's Samurai (1980), Shinobi (1987) (1987) and Golden Axe (1989). Meanwhile, Role-Playing Games with a Hack and Slash component have also been around since 1980s Action RPG titles, such as Dragon Slayer and Hydlide in 1984, and it is a mainstay of many Wide-Open Sandbox games.

Action-Adventure games can have levels that are purely Hack and Slash built into them to mix up the game play a little — and oftentimes, just to help the gameplayer relieve a bit of stress.

A related genre can be found in the Beat 'em Up, where the action is more oriented towards punching, kicking, headbutting, and so forth. See also Action RPG for some more RPG-centric examples of the genre.

Not to be confused with the comic Hack/Slash, the Bumbling Henchmen Duo from ReBoot, crappy slash fic writers, Guns N' Roses, or the video game Hack 'N' Slash (which is actually not this type of game.)

Games in this genre include: