Video Game / The Sword Of Etheria 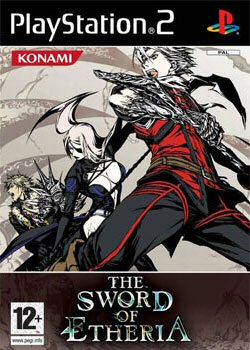 Also known as Over Zenith in Japan and Chains of Power in Korea.

Fiel, a boy who lost his parents at an early age, grew up with his younger sister Dorothy together with their cat Toto, dwelling in a world of humans, gods and spiritual creatures called the Katenas. Trying to bring down mankind, the gods have drained the planet of 'Etheria' (its energy source) and taken control of the Katenas.

Later on, a group of Katenas and monsters attacks the village Fiel is living in and kidnaps Dorothy by monsters called "Volo". Fiel then must save her with the help of two other Katenas, Almira and Leon. Thus, entering the threats present within the grasp of the gods.

Sword of Etheria is a 3D Hack and Slash developed and published by Konami. It was released on June 30, 2005 for the PlayStation 2 in Japan and was later released in Europe on February 24, 2006. The gameplay focuses on aerial combos and powerful finishers, where you send an enemy into the air so your AI controlled partners can continue delivering the pain, filling up a Zenith bar which allows you to execute powerful moves to destroy the enemies.

The game was very well received, making it into the Konami Best Hits titles in Japan. It also features character designs by Fumi Ishikawa of the Suikoden series and music by Michiru Yamane well known for her compositions in Castlevania games as well as being developed by most of the development teams from both series. Despite this, the game is mostly unheard of, mostly due to a case of No Export for You in the US.