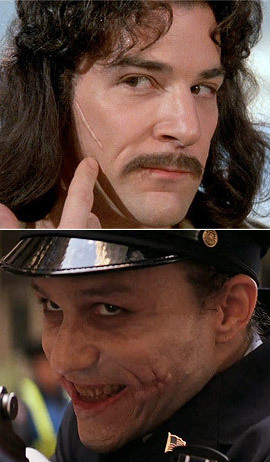 Inigo Montoya: Dashing swashbuckler =
neat scar on cheek
The Joker: Sociopathic murderer =
nasty Glasgow Grin
"Deception. Disgrace.
Evil as plain as the scar on his face."
— "One Of Us,"

You can easily tell heroes from villains by their scars.

Good guys tend to scar in an attractive, fashionable manner — usually a single neat pale line, flush with the skin and placed in one of the following strategic locations: straight across one cheek, straight down from beneath the eye (popular with tough and/or grizzled characters), or straight up from the eyebrow. A scar extending up or down from the lip can happen, but it's rare as it can give a harelipped look more associated with shifty characters (and a similar scar on the other side of the lip is right out). A scar straight over the bridge of the nose has the interesting effect of looking cute and warlike at the same time. They can also have a big, raised scar or a burn, but only if it's in a place where the character has to be shirtless for you to see it. Perhaps the ultimately cliché "good guy" scar is two scars forming an X across the cheek or forehead.

Bad guys can also have fashionable scars to go show off their being evil, which blurs the playing field a bit; more often than not they have big raised slashes (often running up the face, stopping just below the eye, then continuing from the eyebrow up) and mottled, discolored burns. They are not limited to one but may have two or three scars, or be Covered with Scars; they may have a Red Right Hand in the form of a missing eye or ear, missing teeth, or a large chunk out of the nose or chin. Anything they're missing might have an Artificial Limb as a substitute, and in fact they might be so horribly scarred that they generally wear a mask over everything.

The Anti-Hero can go either way. Anti heroes sometimes tend to have a scar starting from below the eye and ending above it while the eye itself is usually intact.

This trope can be easily averted or subverted however, given that a disfiguring scar can be used to show that they've had a hard or even tragic life, or to mark an influential moment in their past.

Doesn't do well for the 'external beauty is meaningless' school of thought; it's more like Beauty Equals Goodness with respect to the relative sexiness/scariness of scars.

If the scarred person has a Love Interest (and the work is sufficiently idealistic), expect said love interest to talk at least once about how they don't care about their loved one's scars.

NOT Truth in Television, as how an individual scars is the result of age, genetics, and how the wound is cared for, while artificial limbs are much more likely to be the result of a transportation accident than an evil deed.

open/close all folders
Asian Animation
Comic Books
Fan Works
The words came out as a rush. "No one at all?" "They try to avoid me." Rayan bit his lip. "It's because of how I look." "Lymo was silent." "Whenever I go out with father on patrol, you can see how they stare at me, like I'm some kind of—of thing. They talk about me behind my back, I know they do, I've heard it, all the time. I feel like everyone's just waiting to watch me fall and say, 'Hey, look at the freak.'"
Films — Animation
Films — Live-Action
Live-Action TV
Music
Professional Wrestling
Roleplay
Visual Novels
Web Animation
Webcomics
Web Videos
Western Animation
Feedback