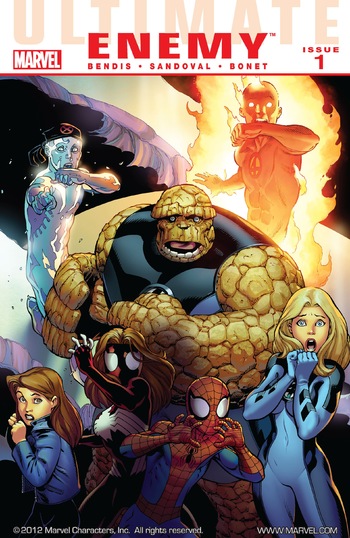 It may be a Late-Arrival Spoiler by now, but yes: the identity of the "Ultimate Enemy" was a big shock on its day.
Ultimate Doomsday is the collected name of a set of Marvel Comics miniseries, running from 2010 to 2011, set in the Ultimate Marvel universe. They are Ultimate Enemy, Mystery and Doom respectively. They are written by Brian Bendis and drawn by Rafa Sandoval.
Advertisement:

It's only been a few months since the Ultimatum Event, and since then the Fantastic Four have broken up. Reed Richards has gone back to living with his family, Ben Grimm has joined the air force, Johnny Storm has moved in to the Parker household, and Dr. Sue Storm is back to doing science at the Baxter Building, alone. One day, Ben pays her a visit to tell her something he's been sitting on for a while - he loves Sue, and always has. Before Sue can answer, he leaves... and then the Baxter Building is quite suddenly attacked by a... well, a something.

And it's not the only place hit. Across New York, Reed Richards, Roxxon Industries and disgraced ex-head of SHIELD Nick Fury are all similarly attacked. But what is the connection?