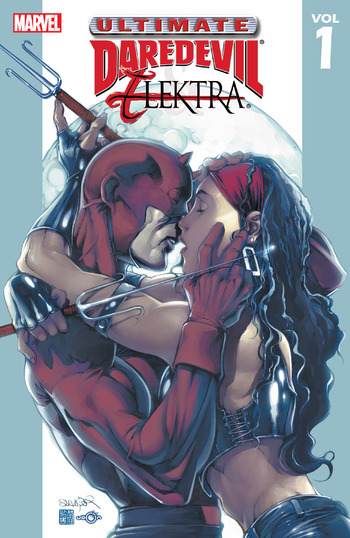 "Ultimate Daredevil & Elektra" is a 2002 comic book starring Daredevil and Elektra reimagined in the Ultimate Marvel universe. It was written by Greg Rucka, with arts of Salvador Larroca.
Advertisement:

Elektra Natchios has just arrived to the campus, and joined Phoebe and Melissa in a dorm room. She introduced them to her sensei in her karate classes. They have a discussion with Trey, a local bully. Elektra also met Matt Murdock in the gym class, and fell in love with him. Things start to get darker when Trey takes things beyond mere pranks, and neither the college nor police can stop him- his father is an influential political figure, and makes sure nothing happens to him. Elektra finally decides to work as a vigilante and take him down, but Matt is a vigilante as well and stops her from doing so.