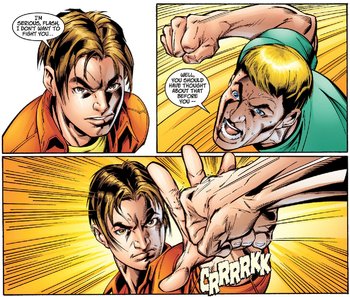 That's not going to end well...
Steve Rogers: I got beat up in that alley. And that parking lot. And behind that diner.
Peggy Carter: Did you have something against running away?
Steve Rogers: You start running, they’ll never let you stop.
— Captain America: The First Avenger
Advertisement:

Bully characters in fiction often seem to use very similar tactics with similar motivations. Beyond just beating up or tormenting their victim, they like humiliating them more than anything — and what a better way than to publicly beat them at a challenge or watch them back down as a coward?

These challenges are almost always public (even if it wasn't meant to be, a la Spontaneous Crowd Formation). They can occur as the climax of the story, but it's not a requirement, as they can also happen at any other point.

Results may vary. In most cases the protagonist wins, either thanks to their hard work preparing and the bully's overconfidence, the Beware the Nice Ones factor, or because the bully was Bullying a Dragon. In some cases, this will lead to Defeat Means Friendship in works that avert Status Quo Is God. However, it most often doesn't lead to anything, and the bully will remain their usual selves come next episode. Sometimes, however, the bully ends up the victor regardless, often with a Curb-Stomp Battle.

Compare Not Afraid of You Anymore; May overlap with Took a Level in Badass. This challenge may involve a Game of Chicken.

Please note that for an example to fit this trope, a challenge of some form must be present or implicit. A character standing up to their bully without a challenge being made is not this trope.

A snowball to the face was the final straw for Ralphie, who takes out all his frustration and disappointment on a unsuspecting bully.

A snowball to the face was the final straw for Ralphie, who takes out all his frustration and disappointment on a unsuspecting bully.