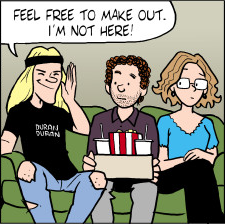 Cas: I could be your third wheel.
Dean: You know that’s not a good thing, right?
Cas: Of course it is. A third wheel adds extra grip, greater stability.
— Supernatural, "Hunteri Heroici"
Advertisement:

Any instance where at least one other character is hanging around a couple and some form of social awkwardness results.

The nature of the third wheel can vary widely. He might be a nuisance to the couple and be constantly told to leave them alone. On the other hand, he might get pulled willingly along with the couple, possibly because they need his help, enjoy his company, or just don't want to be alone with each other. Circumstances might simply conspire to keep the third wheel around, whether or not any of them want him to be there.

Usually does not translate into a relationship between a couple and a third party who genuinely like to spend time together in a friendly way, since that would imply little to no awkwardness.

Since Ninja Brian follows Danny Sexbang like death, he tends to tagalong when Danny is dating or picking up women.

Since Ninja Brian follows Danny Sexbang like death, he tends to tagalong when Danny is dating or picking up women.