Move Along, Nothing to See Here 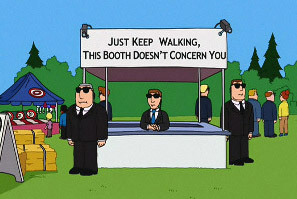 "Ok folks, show's over, nothing to see here, show's... OH MY GOD! A horrible plane crash! Hey everybody, get a load of this flaming wreckage! Come on, crowd around, crowd around, don't be shy, crowd around..."
— Chief Wiggum, The Simpsons
Advertisement:

The standard line used by police officers or The Men in Black keeping people away from something interesting.

It's usually a case of Blatant Lies and often used in Suspiciously Specific Denials.

Compare I Was Never Here.

Nothing to See Here

Frank assures the public that nothing is wrong.

Alternative Title(s): Nothing To See Here

Nothing to See Here

Frank assures the public that nothing is wrong.