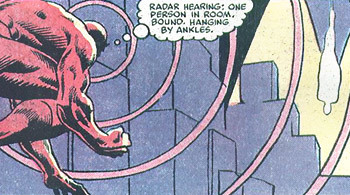 Homer: Wait, I can smell cake... cake that says "Farewell"... and... [gasps] "BEST WISHES!"
Nelson: Your old man has an awesome nose.
Bart: Oh, that's nothing — he can hear pudding.
— The Simpsons, "Guess Who's Coming to Criticize Dinner?"
Advertisement:

Senses keener than those of a human. Origins can be genetic, natural, training, supernatural, or cybernetic.

The classic five manifestations are:

The less well-known human senses, of body position (proprioception) and orientation, are generally not addressed by this trope, but may be subsumed into Super Reflexes and other agility-related powers.

In most cases, they completely ignore the drawbacks of super senses. The characters are rarely overloaded by too much sensory information (a crowd of people all talking at once when you have super hearing is really overwhelming) or by experiencing some unpleasant stimuli much more intensely (e.g., if you have super smell, how do you react to a skunk?). And when it comes to pain... yikes! This may be explained by Required Secondary Powers of sensory fine-tuning, where (for example) a super-hearer can either consciously or reflexively tune out certain amplitudes or frequencies of noise — but don't expect this to be treated as anything more than a Hand Wave.

Truth in Television with certain conditions such as hyperacusis

(unusually acute hearing) and supertasting. In addition, many animals are better at sensing certain things than humans, especially smells (however, humans have better color vision than the majority of mammals).

For extrasensory perception, see Spider-Sense, Supernatural Sensitivity, and Psychic Powers. Compare The Dead Have Eyes. Sometimes overlaps with Hyper-Awareness. See Bizarre Alien Senses when this applies to other species.