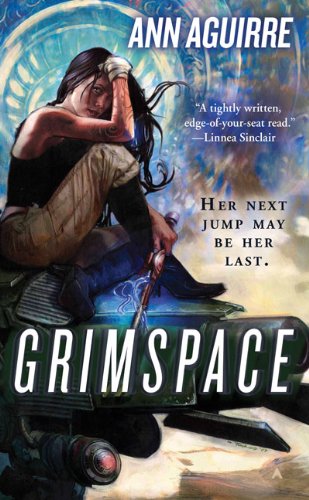 "I am Sirantha Jax, and I have had enough."
— Once an Episode, usually precedes massive asskicking

There's space. An empty blackness that spans between worlds. If ships were to travel straight space, they'd never make any progress at all. But this is hardly a concern because many generations ago, people discovered Grimspace. Grimspace is a plane of burning fire and psychedelic lightstorms, and traversing takes a jumper. Jumpers are the rare possessors of a genetic factor called "the J-gene" and many humans who have the J-gene join with the Farwan Corporation for training and eventual employment, all while they feed their addiction for the incomparable rush that surfing Grimspace provides.

But the convenience of fast travel and the incredible high comes with a steep price.

Jumpers die. Jumpers die quickly. The more jumps they make, the more their lifespans are cut down, and very few of them make it to their 30's.

Our story kicks off with Grimspace, where our heroine, Sirantha Jax, is being confined and "given therapy" because of a terrible accident that she may very well have been responsible for. Unfortunately, she can't remember the crash, so she can't say for certain. Just before real damage could be done to her already scarred psyche, a tall, rough man named March sneaks into the facility and breaks her out. As it turns out, he's part of an organization who needs her to found an academy that will break up Farwan's monopoly, a place where jumpers can be trained away from the corporation's eye. Seeing as how she has little choice, she agrees, and off the group starts to gather the materials they need for the quest, indirectly causing the downfall of the Farwan Corporation in the process.

With the second entry, Wanderlust, we find our crew dealing with the aftermath of Farwan's collapse, the galaxy left in disarray with a considerable power vacuum. Sirantha and crew are recuited by the head of the Conglomerate (the galaxy's official legislative/governmental body) to head a diplomatic mission to the planet of Ithiss-Tor, home to a race of mantid-like humanoids. The reasons behind this mission are discovered on the way to the planet, and the journey is fraught with no shortage of peril.

Doubleblind details the diplomatic mission on Ithiss-Tor itself, with Sirantha and her crew doing their best to adapt to the very alien culture of the planet. Meanwhile, Sirantha sorts things out with her lover, but neither of her chosen tasks are easy and both contain their share of unpleasant surprises. In short order (thanks to some experimental technology) Sirantha starts catching up with her role as diplomat, but an attempted murder with a human-only acid makes things look hopeless.

In Killbox the Conglomerate does its best to gird itself for war against the infamous arachnoid monsters called the Morgut. With a painful dearth of both ships and soldiers, though, the best the Conglomerate can do is recruit all the raiders, mercenaries, and pirates they can get their hands on. It's awkward but proves effective... at first.

In Aftermath Sirantha faces the legal consequences of what she had to do to win the Morgut War and helps to rebuild the Conglomerate's spacelanes. One by one she fulfills her promises and obligations so that she and March can be free to have a future of their own.

The final volume, Endgame, focuses on the last of Sirantha's obligations, the promise she made to Loras of the La'hengrin to free his people from slavery to humanity. But the faux-Roman Nicuans aren't eager to let La'heng go free, and Sirantha must go to war one last time.

A Spin-Off series, the Dred Chronicles, is set in the same world, and features one character who Sirantha had dealings with in Doubleblind.

Ann Aguirre's series definitely falls on the soft side of scifi, with the majority of the plot about conflict between political bodies of various sizes and the monsters (both literal and figurative) that they must dispatch along the way.