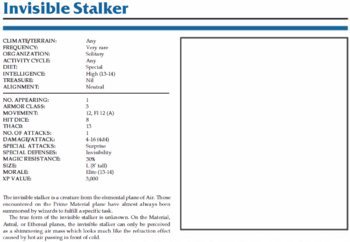 The textbook example.
"I don't believe it. They were too cheap to hire villains!"
— Joel Robinson on invisible enemies, Mystery Science Theater 3000
Advertisement:

You can't see them, but they can probably hurt you.

Many invisible enemies are just variants of ordinary monsters. Or their true forms are never revealed at all. In Video Games, these tend to be Stealthy Mooks and frequently overlap with Goddamn Bats or Demonic Spiders. Sometimes, they become visible when doing specific things, like attacking, dying or moving.

In other media, especially Television, an Invisible Monster is used to save budgets for more outlandish monsters. Often, they are accompanied by creepy noises or music that alerts the Audience to their presence. Done poorly they can be laughable, done right, terrifying.

Not to be confused with the Palahniuk book.

See the Super-Trope, Invisibility, or the sister trope Invisibility with Drawbacks. Take note that Nothing Is Scarier, which is why this can work at all. This is also Truth in Television in a sense, as many "monsters" are microscopic, such as bacteria and viruses, and are invisible to the naked eye.

In The Origami King, Boos turn invisible to make it more difficult to line up your attack.

In The Origami King, Boos turn invisible to make it more difficult to line up your attack.