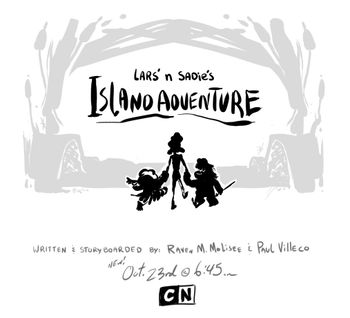 I could have wished a thousand wishes, for this night I can't believe, that it's finally me and you, and you and me, just us -- and your friend Steve.

The episode starts with the Crystal Gems on Mask Island. As Pearl and Garnet stand on the island's beach, they discuss what seems to be a gem monster and that it's missing from the island. As Steven admires the ocean view, Amethyst tells Steven it's time to go. On the warp pad, Steven is able to safely warp all of the Gems back to the house (Calling himself, "Warp Master" before Amethyst pranks Steven by turning her head into a fly's head, making it seem that Steven's warp skills are what caused it). When Pearl mentions they have to warp out again, Steven asks if he can warp the team again, but Pearl tells him no, as they'll be underwater and Steven needs air to breathe. To compensate, Steven goes and tells Lars and Sadie that he's the warp master.

At the Big Donut, Steven bursts in and calls himself the warp master, only to see Sadie and Lars are lying at the counter with the latter asleep. As Sadie tries to get Steven a doughnut, she knocks over Lars and wakes him up, throwing the two into an intense argument. Watching them, Steven once again says he's the warp master, and explains that he can warp the three of them to an island for a vacation. Once there, it's revealed that it's the same Geode island that the Crystal Gems were previously at. Confused and angry, Lars asks Steven why the Gems were there in the first place, and Steven explains that they were looking for a dangerous monster gem. Bursting with anger, Lars stubbornly marches off to the warp pad, only to find it missing. Seeming to be lost, the trio spend the night on the island.

The next day, Sadie tries to catch fish on the island while Lars tries to find a signal on his phone. Asking Lars to help (who refuses as he looks for a signal), Sadie gets frustrated with Lars and stabs the water with her spear, and catches three fish. Angrily, Sadie tells Lars that while they're on the island, she'll catch fish, and Lars will cook it. Later that day, Lars cooks the hunted fish and is complimented by Sadie on his cooking skills. Cracking a joke about fire, Lars is able to get a laugh out of Sadie. Seeing progress in the friends' relationship, Steven sings the song, "Be Wherever You Are." As the song plays, it shows that several days pass by and key events that happen: the three build a hut to sleep in, Lars gives his shirt to Sadie, Sadie is bit by a giant fish (which is later cooked for dinner that night), and Lars uses his pant leg to wrap Sadie's bitten arm. As the three sleep, Lars and Sadie cuddle.

The next morning, Sadie wakes up alone and asks Steven where Lars had gone. Shrugging, Steven points outside to Lars panicking and still searching for a signal. As Sadie tries to calm him, Lars ends up throwing his phone away in the ocean. Crying, Lars admits that he's very homesick. As Sadie reassures that she's there for him, she tries to fist bump him, only to see that he's stroking her hand. Lars asks her if she gets lonely, even when people are there. She nods, and Lars then kisses Sadie on the lips as Steven watches on and interrupts them with the conclusion to the song.

The two yell at Steven, as they were having a moment and Steven rudely interrupted them. Before scolding him further, the three are confronted by a floating gem and get knocked off the side of a hill. Steven then deduces that the gem is the monster they were looking for: it never really left, it was just invisible! As the three run away, Lars starts to sob and desperately exclaims that he wants to go home. Sadie, watching with a look of guilt, leads the three through the forest to a large lump covered in leaves. Uncovering it, it is revealed to be the warp pad, as Sadie had hidden it in a panic knowing that Lars needed the vacation. Blaming her for everything that happened, Lars starts to yell at Sadie, even going as far as to shove her and say that she forced herself onto him. Shoving him back, Sadie accidentally pushed Lars off a cliff where the monster is hiding.

Terrified, Lars is thrown around by the beast until Sadie comes down and knocks the beast over. Fighting it, Sadie is able to tackle and aggressively shove the beast around, and eventually destroy it as Steven had thrown her spear to Sadie, telling her to use her "fish-murdering skills" to destroy the monster which she does. Obviously hurt, Sadie gets up and uses the stick to walk to the warp pad. As Steven compliments Sadie's awesome fight, Lars awkwardly compliments her too, to which she replies that it's not an action to read into. Before they warp away, Steven tells them that they should do this again sometime.

And we Iris Out over the warp pad.