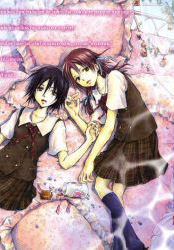 Satou Kashi no Dangan wa Uchinukenai (砂糖菓子の弾丸は撃ちぬけない, A Lollipop or a Bullet) is a manga series based on the novel Sugar Candy Bullets Can't Pierce Anything by Kazuki Sakuraba. The manga is illustrated by Iqura Sugimoto, and it was serialized in Dragon Age from 2007 to 2009.

Nagisa Yamada is an aloof and anti-social middle school girl who lives in a nondescript rural town. After the death of her father caused her mother to struggle to make ends meet and her brother Tomohiko to withdraw from the world around him, Nagisa decided that things like high school and friendship meant little to her. Thus, she wants nothing more than to graduate middle school and enroll in the Self Defense Force, where she hopes to be able to shape her own destiny.

When a rich and strange new girl by the name of Mokuzu Umino transfers into Nagisa's school from Tokyo and declares that she is a "Mermaid", she quickly becomes the center of attention. Noticing that Nagisa is the only classmate that seems to have no interest in her, Mokuzu quickly decides that they should become "precious friends". Despite Nagisa's objections, Mokuzu begins to follow her wherever she goes.

How will Nagisa, who cares for nothing that is "not a bullet", deal with this eccentric girl who claims to need her friendship in order to survive? And what will she do if Mokuzu's wild stories turn out to be true? Or, if she's actually lying about being a mermaid, then why would she make up such tales...?