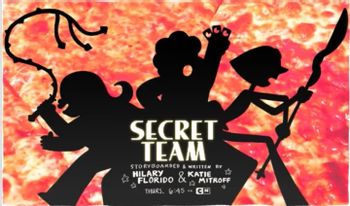 Steven is in Amethyst's room jumping in a puddle when Amethyst tells Steven "put more ball into your cannon", which scares Steven until Amethyst demonstrates by jumping then turning into a ball. Steven and Amethyst climb out of the puddle to find another one for Steven to jump into when he looks into one to find The Burning Room and Garnet bringing back a bubbled gem. Amethyst then pulls Steven back and tells him only Garnet is allowed in there. Amethyst suggests for Steven to climb up a pile of trash and jump into another puddle which leads him to Pearl's room.
Advertisement:

When they get in Pearl's room they see her with a gem that Rose Quartz had bubbled, staring at it intently. Amethyst realizes that Garnet would be agitated if she found out what Pearl did, and decides sneak up on her. After surprising her, Amethyst threatens to tell on Pearl which results in them arguing. Steven tries to intervene so he grabs the bubble, and Pearl tells Steven to be careful with it. Simultaneously, Pearl and Amethyst push the bubble and pop it. To their horror, the gem fragments escape, turning into hideous disembodied arms. Steven wants to tell Garnet what happened but is told not to do so as they would be severely punished if she knew, so they form a secret team to recover the fragments.

After a series of montages of Steven struggling to take out one fragment and the Gems taking out many with teamwork they finally retrieve all the fragments. Steven bubbles them, but while attempting to put them back he sees Garnet in the Burning Room and freaks out. Amethyst and Pearl pull him up to see whats wrong. After telling them what happened them they ask if Garnet saw him, which Steven replies with a "no". Pearl and Amethyst then put Steven back in the puddle and he puts the bubble back. Much to Steven's dismay, they disband their secret team.

Steven later tries to get the team reformed by telling them he left his hat in town and they need to go retrieve it. Both Pearl and Amethyst deny that Secret Team ever existed. They start blaming each other for popping the bubble in the first place, then storm off in opposite directions. Steven decides to tell Garnet what happened after setting up a meeting with her at Fish Stew Pizza. Garnet tells Steven that they need to form their own secret team to fix this.

Back at the temple, Garnet, with Steven in tow, confronts Pearl and Amethyst about the popped bubble. The two older Gems are content to let Steven take the blame for it. Suddenly, Garnet is dragged underwater by giant hands — apparently they missed a shard. Pearl and Amethyst try to fight off the hands, but they both get captured and fearfully apologize to each other. Garnet then reemerges from the water, revealing that the hands are actually hers. She chastises the two Gems for keeping secrets, reminding them that they're all already on a team together—the Crystal Gems!

And we Iris Out over one of the ripped up coupons.