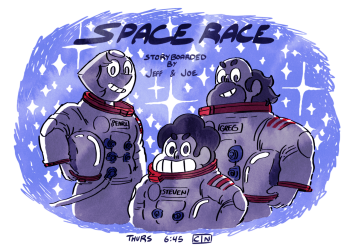 Do they have The Right Stuff? Probably not.

Steven and the Gems travel to the Galaxy Warp pads, but find they're all inactive. Steven's method of helping is to put Crying Breakfast Friends stickers on each broken pad to identify it as such, and when he asks if they can be repaired, Garnet's answer is a simple "No." The Gems explain they've been broken for thousands of years but used to be able to use them to travel throughout space to Gem-controlled planets. As Pearl describes this to Steven, she becomes melancholy, and Steven realizes she misses space.

Steven asks his father Greg to help him build a spaceship so Pearl can see space again. Although he readily admits a spaceship is out of his skillset, Greg brings Steven to an old barn owned by his aunt and uncle, full of parts they use to build the first ship. They show it to Pearl as a surprise: it is mostly plywood and duct-tape, little better than a soapbox racer. Steven puts on his helmet for the test drive, and Greg lights the sparkler on the back, reminding Steven if the test doesn't go well, there's no shame in bailing.

Pearl is mildly amused that they thought this would get to space. Greg was pretty obviously humoring his son, but now the idea is in Pearl's head since a human, a monkey, and a dog have successfully made it to space, and that although it'd be primitive, it is possible. They test the Mach 2, which is kind of like an Ultralight. Steven lands it successfully, and the ejection seat works, but the whole thing falls apart. Pearl is undaunted, and says she'll work out the bugs in the next one. Greg realizes when Pearl talks about getting a space suit for Steven that Pearl is absolutely serious about going to space, and declares Steven is not allowed to leave the planet.

While Greg is asleep, Pearl shows Steven the Universe Mach 3, and offers to take him on a test run. Greg sleeps heavily through their preparations until the engine roar wakes him. The ship is soon gone too far, too fast, for him to keep up, so he gets on the radio and demands Pearl land.

Pearl: It's just a test flight to the nearest star system. I'll bring him back in fifty years.
Greg: What?! I'll be dead in fifty years!

But Pearl is closer to getting to space than she's been in years, and is determined to make it, and to show Steven. Suddenly the Mach 3 ship begins coming apart around them. Steven tells Pearl, but she ignores him, focused exclusively on her goal of getting back into space. Steven finally has to climb right into her face and tell her that although he knows she misses space and space travel, they're not going to make it and they have to bail.

A tearful Pearl acknowledges that Steven's right, grabs hold of him tightly, and triggers the ejection seat.

At ground level, a horrified Greg gets to see the ship leave a contrail in the sky before exploding. But the parachute soon appears indicating that Steven and Pearl bailed out in time.

As they drift back to earth, Pearl acknowledges that staying on earth is not so bad.

We Iris Out over the sun rising over the horizon.