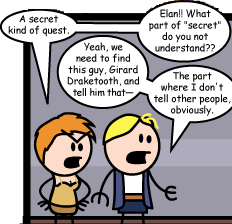 A classic sitcom trope, in which a character seems to be physically incapable of keeping a secret for very long, at least without showing extreme discomfort. Usually, by the end of the episode, or even within the same scene, they would spill the beans. Although sufferers of this trope in fiction are mostly women, due to the prevalent stereotype of women as gossips, there are male examples too.