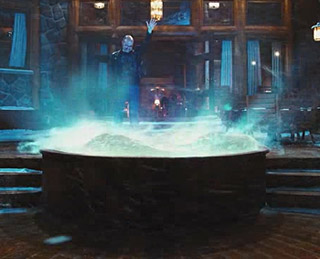 Digory: I think we can get out of this place into jolly well Anywhere! We don't need to jump back into the same pool we came up by. Or at least not yet.
Polly: The Wood between the Worlds. It sounds rather nice.
— The Magician's Nephew
Advertisement:

If you're a character in a fantasy setting, proceed with caution when approaching any large body of water. The most mundane-looking lake, spring, waterfall or well could secretly be a portal to a Magical Land. Your Breather at the local hot spring could turn dreadfully exciting without warning.

In some, you just keep falling until the water disappears and you hit solid ground — always unharmed, of course. In others, you step or fall in, go down (what are those weird lights?), turn to head back up (wasn't this down a minute ago?), and find you're still in a body of water, but it's not in Kansas anymore. Such cases are not guaranteed to work both ways.

Compare Portal Picture, its oil-and-canvas counterpart. Also compare Portal Door, when doors lead to someplace non-adjacent. When the portal is actually a swirling vortex, see Mega Maelstrom. Not to be confused with No Flow Portal, which can be about portals immersed in pools, nor with the pools in Portal, which will cause an unsatisfactory mark on your official testing record, followed by death. Nor this,

◊ as long as we're talking about Portal.

Darius teleports the captured members of B.A.T.T through pools of his abominations.

Darius teleports the captured members of B.A.T.T through pools of his abominations.