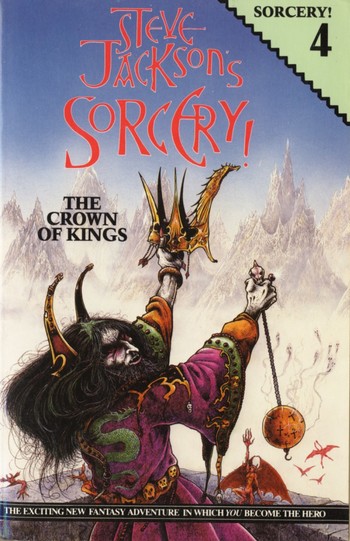 One crown to rule them all. It's good to be the king!
Advertisement:

Sorcery! is a Gamebook series that is a spin-off of Fighting Fantasy, intended as a Darker and Edgier companion series aimed at adults. It comprises four volumes, which form one large over-arcing adventurenote The Sorcery Spell Book, an illustrated version of the spellbook eventually provided as part in the other volumes, was also published:

You have the option of playing as a wizard or a warrior; wizards are given lower initial stats than warriors but can use the spell system, which consists of three-letter codes the player has to memorise and various items involved in the casting of spells. The series was designed chiefly to be played as one epic, but each volume can be played separately. It was written by Steve Jackson (the British one).

The plot is as follows: the Kingdom of Analand is given a magical crown, the Crown of Kings, that is passed around each year to a different kingdom as it grants the power to rule wisely. But something wicked happened: one night, Birdmen stole the Crown and took it to the cursed castle of Mampang, where rules the nefarious Archmage who has decided to rule over the land of Khakabad. Analand decides to send a single warrior/wizard in order to retrieve the Crown.

All four books have now been released by Inkle

as iOS, Android Applications and PC compatible games as of 2016. The video game versions start out as relatively straightforward adaptations but gradually diverge, adding much new content and changing characters or locations. See the Sorcery! video-game page.

The series has twice been adapted into a multiplayer adventure for Tabletop RPG campaigning, once for use with the d20 system and more recently for the Advanced Fighting Fantasy system itself.

Not to be confused with Sourcery.