Inn of No Return 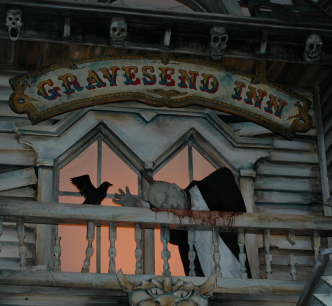 "Why do we never break down at the Four Seasons?"
"Relax," said the night man,
"We are programmed to receive.
"You can check out any time you like,
"But you can never leave!"
— Eagles, "Hotel California"
Advertisement:

Basically, a place of accommodation that kills its customers and robs their corpses. For unknown reasons, this turns up a lot in French literature/works set in France. Sometimes, to "get more bang for the buck," the proprietors will "serve" their guests as well. One wonders how these places advertise and attract guests/victims, other than the possible curiosity if rumors of their crimes are publicized. See also Hell Hotel and Inn Security, although in the latter, attacks on guests are generally not by the inn's owners.

If it is just impossible to leave, and you stay forever, see Lotus-Eater Machine.