Do Not Taunt Cthulhu 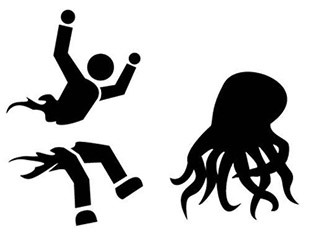 Do Not Taunt The Octopus!
"You have an inflated sense of your importance. To a thing like me, a thing like you, well...think how you'd feel if a bacterium sat at your table and started to get snarky. This is one little planet in one tiny solar system in a galaxy that's barely out of its diapers. I'm old, Dean. Very old, so I invite you to contemplate how insignificant I find you."
— Death, Supernatural

So you're facing a powerful enemy, and you appear to have some sort of power over them? Perhaps you've locked them up, or they're not as terrifying as you thought, or maybe they've lost all their powers. At any rate, you start to taunt them, confident in your victory.

They promptly obliterate you.

Of course, other things can happen. Maybe you can stare into the abyss and make it blink first. Point is if you're gonna talk crap to an Eldritch Abomination, make sure you can back it up first.

A Sister Trope to Death by Mocking and Bullying a Dragon. Often overlaps with Tempting Fate.

Do not mock Witch Warrior.

The Channel Awesome crew learns not to mock a witch when they meet one.

Do not mock Witch Warrior.

The Channel Awesome crew learns not to mock a witch when they meet one.