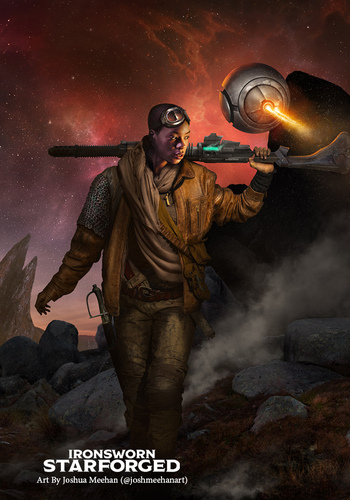 Welcome to the Forge; a perilous galaxy awaits
Advertisement:

Ironsworn: Starforged is a space Science Fiction Tabletop RPG. In this game, you play as a spacebound hero undertaking perilous quests in a dangerous star cluster, the Forge. As one of the Ironsworn, you swear and fulfill vows at any cost.

Written by Shawn Tomkin, Starforged is a standalone sequel to the fantasy RPG Ironsworn and is Powered by the Apocalypse. Its setting is inspired by The Mandalorian, Star Wars in general, Firefly, Alien, Battlestar Galactica (2003), Dune, and The Expanse. With its gameplay Starforged builds on the same influences as Ironsworn, while also drawing from another science-fiction RPG, Stars Without Number.

Compared to the "core" version of Ironsworn, Starforged retains most of its successor's mechanics, including moves, momentum, progress tracks, and oracles. On top of this, Starforged refines several mechanics and creates new oracle tables and assets for a space sci-fi setting.

On April 2021, a Kickstarter campaign launched for Starforged, which can be accessed here

. The game was released on May 6th, 2022 and is available for purchase on the "Starforged Store,"

This game includes examples of the following: