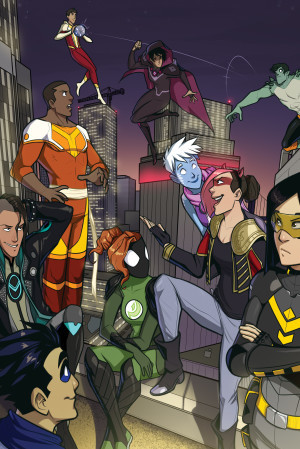 Masks: A New Generation, also known simply as Masks, is a Powered by the Apocalypse game by Magpie Games, funded through Kickstarter. The game takes place in a bustling metropolis known as Halcyon City, which has been an epicenter of superpowered activity for three generations so far. There was the Golden Age, the Silver Age, the Bronze Age...

...but now, a new generation of heroes is on the rise.

Masks casts its players as a team of teenage to young adult superheroes, in the vein of Teen Titans or Young Justice. The game's Splats (called "Playbooks") suggest your hero's origin and the main issue they struggle with in their superhero career—for instance, you might be an alien from outer space learning to fit into human society, or somebody coming to grips with the way their newly acquired superpowers have changed their body, or the protégé of an established superhero trying to live up to your mentor's expectations.

However, the game's central mechanic—and its biggest departure from the design of other Apocalypse games—is the way it handles stats. Rather than having the set, largely static stats found in other games, Masks uses a system of five "Labels" (Danger, Freak, Savior, Superior, and Mundane) that give you bonuses on dice rolls but also reflect how your character views themself—and since all characters are young adults trying to find their way in the world, these Labels shift up and down constantly. A character can shift their own Labels by coming to a new understanding of themselves, but it's also possible to have your Labels shifted for you if another character has Influence over you.

In short, take your standard Superhero RPG, add a healthy dash of Coming-of-Age Story, and you have Masks.

Available for purchase and download off of Magpie Games' site here.