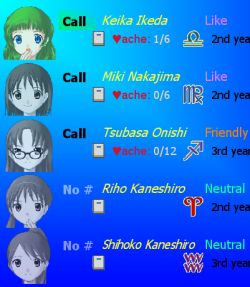 Do you mean that she likes me, or that she likes me?
"So you can actually say, Oh yeah, sorry I two timed you with that other person. But look! Presents!"
— Daniel Erickson in regards to how the relationship can be affected in Star Wars: The Old Republic
Advertisement:

In many Video Games, there exists Relationship Values that reflect how much your party members (or other NPCs) like you. Often hidden, they can be altered by your in-game behavior and choices. Types of behavior that can change your relationship values include:

Most available choices will please some characters, while disappointing others. Therefore, part of the challenge lies in either allocating your praise equally among all characters, or (more likely) figuring out whose good side is worth getting on and whose isn't. Relationship Values can be frustrating, because what affects your relationship values, and even the existence of Relationship Values themselves, is often not alluded to during the game. Furthermore, the player character's actions may affect his relationship with others in unexpected if not nonsensical ways, such as when a character's relationship with the player character is changed despite them not being present when the actions are carried out.

The results of having a good or bad relationship value are varied. Common examples include unlocking an alternate cutscene, gaining access to a different ending, or simple gameplay buffs/bonuses.

Almost all Dating Sims have these, and, indeed, they are usually the whole point of the game. Strategy games (notably 4X games) may also have a variation of this, tracking your relations with other factions (and theirs with each other).