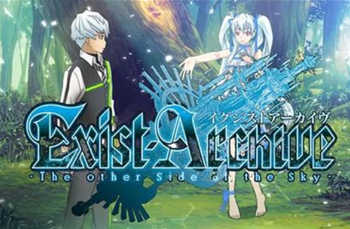 Exist Archive: The Other Side of the Sky is an Eastern RPG developed by Spike Chunsoft, with help from tri-Ace. It was released for the PlayStation 4 and Play Station Vita in December 2015 in Japan, and October 2016 worldwide, by Aksys Games. It is considered by some to be a spiritual successor to Valkyrie Profile.
Advertisement:

Twelve youths from Japan are caught up in an accident in modern-day Japan, and wake up to find themselves on the mysterious planet of Protolexa. They discover that the evil god Yamatoga, split into 12 pieces, has assimilated into them. The administrator of Protolexa, Amatsume, has summoned the youths to Protolexa in an attempt to prevent Yamatoga from re-forming, in exchange for all of her power. The youths attempt to gather "Existence Crystals", in order to restore Amatsume to her full power in order to be sent back home.