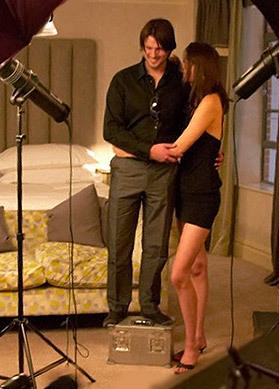 "[I am] five feet nine. Quite little, really. From a squat tribe, you see. My brothers (and sister) are all taller than me, as are most of the actresses I'm required to smooch. At such times they usually stand me on a box. Sort of keeps your feet on the ground, paradoxically."
— Paul McGann
Advertisement:

If an actor looks too short next to a costar, the easiest thing to do is to have them stand on something to make them taller.

Named for a special box from the production of The X-Files. Standing at 5'2" (1.57 m), Gillian Anderson was much shorter than her co-star David Duchovny, who was 6'0" (1.83 m). Consequently, to keep Scully and Mulder on roughly the same plane while shooting them together, they developed a special box for her to stand on (also referred on set as "Gilly-Board"

after the actress). Unlike the traditional movie apple box or trench, a Scully Box can be stacked up, or laid out in a runway. It's very versatile and used to accommodate large height differences between cast members.

The term "apple box" is prevalent in the industry for an actor-heightening wooden box of a given dimension, typically: 12" × 8" × 20" or 30 × 20 × 50cm. A Scully Box is an 'apple' and a half and is constructed of aluminum covered with outdoor carpeting for sound-deadening and traction.

If the camera is lowered and angled upward to create the illusion of height, it's a Hitler Cam shot. Compare Cheated Angle. A lack of Scully Box can lead to a "Down Here!" Shot.