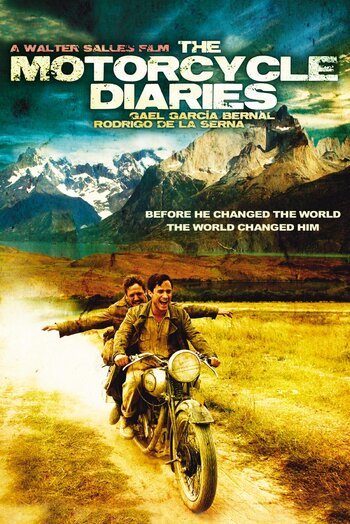 Before he changed the world, the world changed him.
Advertisement:

The Motorcycle Diaries (Diarios de motocicleta) is a 2004 Biopic of Che Guevara, directed by Brazilian Walter Salles. It is based on Che's eponymous book and Alberto Granado's one, Traveling with Che Guevara: The Making of a Revolutionary (Con el Che por Sudamerica).

Ernesto Guevara (Gael García Bernal) was once, before becoming the "Che", a medicine student at the University of Buenos Aires. He and his buddy Alberto Granado (Rodrigo De la Serna) decided to ride Che's motorcycle, "La Poderosa" ("the Mighty One") through Argentina, Chile, Peru, Colombia and Venezuela. The motorcycle dies in Chile, but they still make it to Caracas.

The Motorcycle Diaries provides examples of :