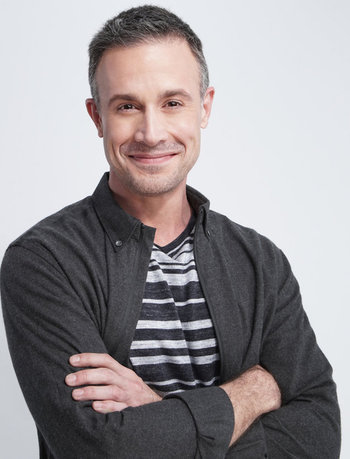 "Life is not about making dough or how many movies you can make in a year. It's about finding someone that you can share things with."
Advertisement:

Prinze is perhaps best known for starring in a string of youth-oriented films throughout the mid-late '90s, such as I Know What You Did Last Summer, Summer Catch, and She's All That. He also starred in both live-action Scooby-Doo movies as Fred Jones, and Freddie, a sitcom he co-created.

Outside of live-action film and television, Prinze has also done some voiceover work in animated works and video games. Most notably, he portrays James Vega in the Mass Effect universe, Iron Bull in Dragon Age: Inquisition, and Kanan Jarrus in Star Wars: Rebels.

Prinze is married to actress Sarah Michelle Gellar, with whom he has two children. They met while filming I Know What You Did Last Summer, and also appeared together (as love interests) in the Scooby Doo films and Rebels (as enemies).

His father, the late Freddie Prinze, was also an actor, best known for his starring role on the '70s sitcom Chico and the Man.