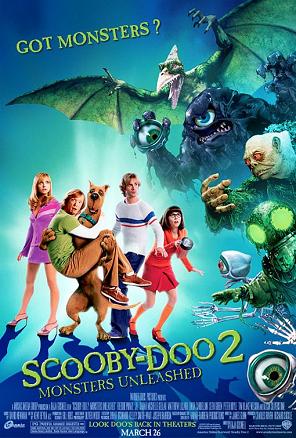 Scooby-Doo 2: Monsters Unleashed is the 2004 sequel to the 2002 live action movie Scooby-Doo, directed by Raja Gosnell and written by James Gunn.

Mystery Inc. is attending the grand opening of a museum based on their adventures and the monsters they caught. However, the celebration is cut short due to the Pterodactyl ghost attacking and stealing two different costumes. As it turns out, someone is using a machine to reanimate the monster costumes and turn them into real monsters.

The film is noticeably more kid-friendly than the first film, and was an even worse failure critically (winning a Razzie for "Worst Remake or Sequel"), and grossed around $180 million, making a profit, but not as much as Warner Bros. had expected. While this did signal the end of the full feature films, Warner would go on to make two live action made-for-TV prequels five years later: Scooby-Doo! The Mystery Begins and Scooby-Doo! Curse of the Lake Monster.

This was the final live-action Hanna-Barbera adaptation to be overseen by co-founder Joe Barbera, who died a year later.