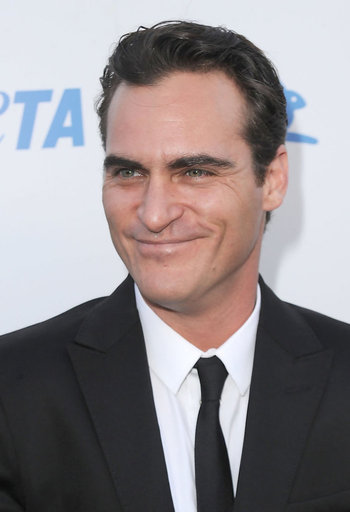 "For me, I guess I'm the acting equivalent of somebody that jumps off buildings and parachutes."
Advertisement:

What do you get when you cross a talented American actor with a WEBSITE that describes things and ruins lives?! I'll tell you what you get! You get the description of Joaquin Fuckin' Phoenix!

Joaquin Rafael Phoenix (born Joaquin Rafael Bottom; October 28, 1974) is an American actor and the younger brother of deceased young actor River Phoenix. In appearances as a child actor, he was billed as Leaf Phoenix up through the end of the 1980s in emulation of his siblings River and Rain; from To Die For onward, he reverted to Joaquin.

While his older brother was a widely praised up-and-coming actor who ultimately died (via drug overdose) before he could reach his full potential as an actor, Joaquin ultimately avoided such a fate and obtained the sort of successful film career that his brother would have surely had if not for his death.

His most famous roles include Commodus in Gladiator, Merrill Hess in Signs, Jack Daglish in Hotel Rwanda, his critically acclaimed portrayal of Johnny Cash in the biopic Walk the Line and a new take on The Joker in the eponymous film.

In 2008, Phoenix announced that he would be retiring from acting to become a professional musician, mainly in the genre of rap. No one seemed to know if he was serious or pulling an Andy Kaufman. The ordeal was covered in I'm Still Here, a 2010 documentary made by his brother-in-law Casey Affleck, which mainly showed Phoenix acting crazy and didn't help to answer the question. On September 16th of that year, Affleck revealed that the whole thing, going all the way back to Phoenix's switch to a musical career, was a big hoax, and in effect, the most extensive character that Phoenix has put together yet. In 2012, Phoenix made his return to acting in the Paul Thomas Anderson film The Master.

Phoenix is an outspoken vegan and animal rights activist. Among other efforts, he narrated Earthlings, a documentary about animal abuse, and produced Gunda, a wordless Nature Documentary set on a farm. He's also a known environmentalist and ally for queer people and minorities, even criticizing Hollywood for not being inclusive enough.

He's engaged to Rooney Mara. They have a son, who was born in 2020 and named River in homage to Joaquin's brother.

Tropes related to his work include: