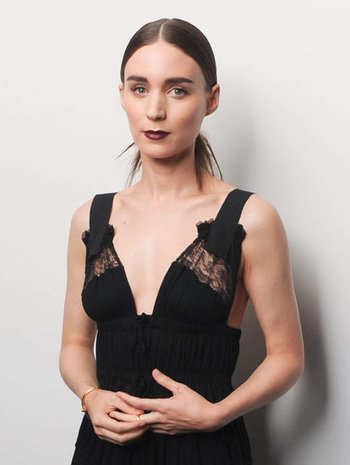 "I always wanted to be an actor, but I was always fighting it. It never seemed that honorable to me, and I guess I was always afraid that I might fail."
Advertisement:

Patricia Rooney Mara (born April 17, 1985 in Bedford, New York) is an American actor. She was initially known for being the younger sister of actor Kate Mara, but has since acted in some major roles of her own. Mara is named after the last names of her paternal and maternal families; her great-grandfathers, Art Rooney Sr. and Tim Mara, founded the Pittsburgh Steelers and the New York Football Giants, respectively. (Kate has the same surnames, but Rooney made sure to not even use her given one.)

Her first major starring role was as Nancy in A Nightmare on Elm Street (2010) remake. She then got a small part as Mark Zuckerberg's ex-girlfriend in The Social Network. She had only two scenes in that movie, but apparently director David Fincher was impressed enough to cast her in the role of Lisbeth Salander in The Girl with the Dragon Tattoo.

Mara also oversees a charity called "Faces of Kibera" that helps orphans from the Kibera slum in Kenya.

She is engaged to Joaquin Phoenix and gave birth to their son in September 2020. He was named River for Joaquin's late brother.