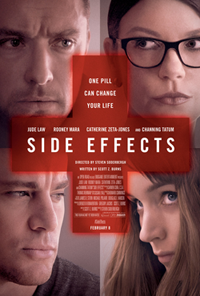 The film is initially about Emily's (Mara) struggle with depression following her husband's four-year imprisonment for insider trading. Having been "swept off her feet" by the rich and charming Martin (Tatum) at only twenty-three, Emily found out the hard way where his money came from when he was imprisoned just a year after their marriage. Enter Dr. Banks (Law), a psychiatrist who seems to be able to help Emily with a new anti-depressant drug, Ablixa. But as it turns out, Ablixa has powerful and dangerous side effects...