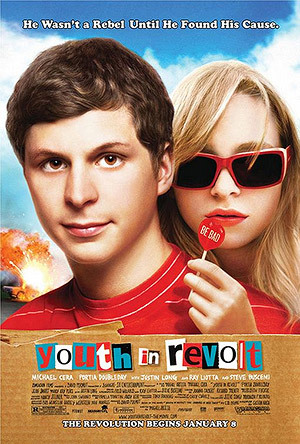 Michael Cera, but not quite like you know him.
In the movies, the good guy gets the girl. In real life, it's usually the prick.
Francois: I'm gonna wrap your legs around my head and wear you like the crown that you are.
Nicky: If that's okay with you.
Advertisement:

Youth in Revolt is a 2009 film directed by Miguel Areta, based on a book of the same name, and follows Nick Twisp, an Unlucky Everydude who's unhappy with his position in life. But everything changes for him once his mother's current boyfriend owes a great deal of money; they flee the town on vacation to Clearlake and stay at a trailer park. There he meets Sheeni Saunders.

Once the vacations ends and Nick has to head back home, Sheeni and Nick formulate a plan: Sheeni will try to have Nick's father move to a town near her, and Nick will start acting out in order for his mother to kick him out and have him move in with his father. Once Sheeni finishes off her part of the plan, Nick gets creative with his: he creates an alter ego in the form of Francois, a badass smoker who is everything Nick imagines Sheeni wants.

The trouble is things go exactly as planned.

Youth in Revolt provides examples of: