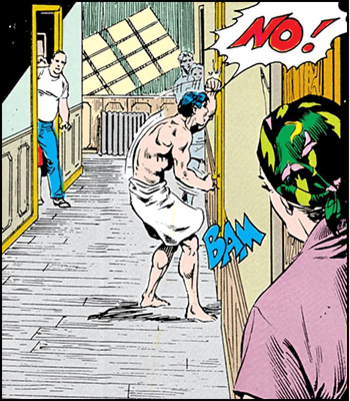 "And now, I ran out of the house, naked somehow."
— Homestar Runner
Advertisement:

Characters find themselves locked out of a location, which would make for a considerably less socially awkward situation if not for their also being nude. Hilarity Ensues, because Naked People Are Funny although it can more rarely be Played for Drama.

The sequence normally involves the character struggling to find/acquire their clothes or a way back inside without being seen, possibly resorting to Bankruptcy Barrel, Clothesline Stealing, Hand-or-Object Underwear, Improvised Clothes, Mobile Shrubbery or Stripping the Scarecrow. They will often fail and get caught or seen by someone, usually resulting in a Naked Freak-Out.

Note that the characters in question don't necessarily have to be naked; in their underwear, a bathrobe or a towel is close enough. The Rule of Funny here is based on the awkward situation more than it is the actual nudity. Well, most of the time. Sometimes this can be Inverted, with the character trapped naked inside a room while people are outside; in that case they're likely to Open the Door and See All the People.

Can be started off by Clothing Damage, Gone Swimming, Clothes Stolen, Shapeshifting Excludes Clothing, Slippery Swimsuit, Stripping Snag, or Undressing the Unconscious. May involve the use of Scenery Censor, Shoulders-Up Nudity or other Censorship Tropes to keep any naughty bits concealed. If the character fails to stay hidden, they might make a Naked First Impression. Or they might get back inside, only to find a Birthday Suit Surprise Party.

If a character keeps getting into this kind of predicament for some reason, they're probably a Reluctant Fanservice Girl...unless the character in question is not ashamed of their state of undress, then the humor will instead come from other people's discomfort, with them likely telling the character to Please Put Some Clothes On.

See Chained to a Bed for when an underdressed character is chained to an object, see "Not Wearing Pants" Dream for when this sort of scenario happens in a dream and see No-Gear Level for when a character is stuck somewhere without their gear.