Film / Rumble in the Bronx 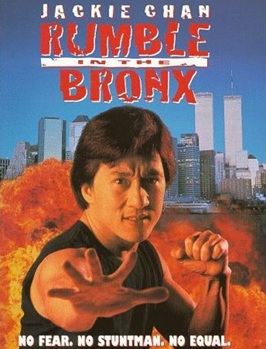 Rumble in the Bronx is a 1996 film starring Jackie Chan, developed specifically as an attempt for him to break into the Western film market, after some failed attempts in the past which tried to mimic Stallone or Schwarzenegger-style serious action films. This film is unabashedly Jackie Chan-style; considering it opened at #1 at the box office, Chan evidently succeeded beautifully and joined the Hollywood mainstream.

Chan plays Keung, who travels to New York City to visit his uncle and help out with the grocery store. He finds himself having to defend the store, and eventually himself, from a local gang. Things get complicated when a very dangerous criminal group and the FBI get mixed up in the events.

Like most of his films, the story is just an excuse for some spectacular stunts and fast action. Among the highlights are him beating up the gang in their own warehouse and his creative use of appliances and sporting gear.