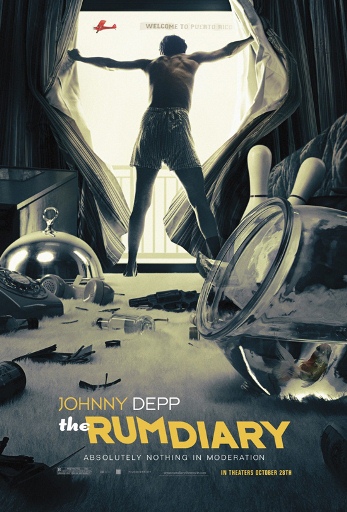 But why is the rum gone?!
Advertisement:

A 2011 American film starring Johnny Depp, based on Hunter S. Thompson's lone novel and written and directed by Bruce Robinson.

Paul Kemp (Johnny Depp) arrives on the island of Puerto Rico after being enlisted to become the newest reporter for the San Juan Star. Kemp is introduced to his newest co-workers, old veteran Bob Sala (Michael Rispoli) and oddball Moburg (Giovanni Ribisi) as well as his cigar-chomping editor boss Edward J. Lotterman (Richard Jenkins) and is told he will be doing color stories for the paper.

The movie revolves around the many adventures Kemp gets himself into, eventually including a plot by a corrupt realtor Hal Sanderson (Aaron Eckhart) to purchase a nearby unspoiled island and turn it into yet another tourist destination. And things get even more complicated when Kemp ends up falling for Sandersons' girlfriend, Chenault (Amber Heard).