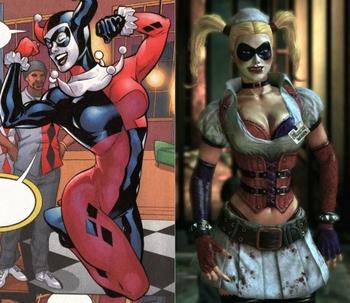 Amazing Alice finally gets her big-screen debut. She's always been known as a heroine with a rather conservative dress-style. However, when the trailer for Amazing Alice comes out, she's wearing... a lot less. Her pants are replaced with shorts stopping just below her butt, and her jacket and shirt are replaced with a midriff-baring tanktop. What happened? Well, it looks like Alice has been hit with a case of Adaptational Skimpiness.

At times when adapting certain characters to different mediums either due to more creative freedoms, less restriction on ratings, to show off Adaptational Curves or just because Sex Sells, they'll be often given a makeover in the form of new clothes... well, less clothes.

This trope occurs across mediums or continuities. When this happens within a series, see Fanservice Pack (which isn't always about clothes).

While this is a subtrope of Hotter and Sexier, this trope usually doesn't require the whole work to fall under such a change. This usually only applies to a single character.

The trope is usually done for Fanservice, but there are examples where fanservice isn't a factor. However, these are rather rare.

Compare Hotter and Sexier and Adaptational Attractiveness. See also Sexy Whatever Outfit. Contrast Adaptational Modestynote List any inversions over there. and Tamer and Chaster.