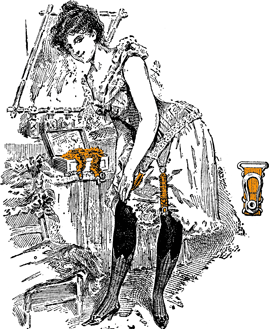 "I can't believe there was once a time when women wore garter belts ALL the time, not just to be sexy, then some guy invented pantyhose. That guy's a DICK! What was he thinking?!"
— Mitch Fatel, stand-up comic
Advertisement:

We all know what Ms. Fanservice wears to accentuate certain assets: the corset. What if she wants to show She's Got Legs as well?

That's where Stocking Filler comes in. We have fishnet stockings

, and, of course, the ever-popular garter

For works prior to the 1960s, this was something of an Enforced Trope, as American and European women simply wore stockings every day as part of their regular underwear. Initially the stockings were opaque knitted ones in your basic white (for young women) and black (for older ones), while working-class women might get away with brown or grey. With the shorter hemlines that came into fashion shortly after the turn of the 20th century, stockings became less underwear and more a fashion statement—new designs were lighter, more translucent, and came in a variety of patterns and colors—but were still considered mandatory wear; there were even black swimming stockings meant to be worn with bathing suits. A pair of silk stockings might set a lady back a whole $2.50 (nearly $30 in 2018 dollars), and when cheaper, more durable nylon stockings became available in 1939, they were considered a boon to womankind. When stockings became unavailable due to shortages of silk and nylon during World War II, women simply drew a line up the back of their calves to imitate stocking seams. A special makeup was even developed for use on the legs to mimic the appearance of stockings, with poorer women going so far as using tea or gravy to temporarily dye their legs rather than be seen bare-legged in public.

However, due to the strict moral standards of the day (of which The Hays Code is exemplar), scenes depicting the full ensemble with garters and all were uncommon in American movies (though more frequent in European films); however, there were exceptions to the rule for using the trope for comedic purposes, and things started loosening up in Hollywood movies during the '50s. These days, they're considered inconvenient for daily wear (much like the corset was decades before), due to factors such as the widespread popularity of short skirts since the '60s and the introduction of pantyhose during the same decade, but still frequently encountered for fanservice purposes or as a throwback to the Golden Age of Hollywood.

Expect the Femme Fatale to be dressed this way, and very likely to use the garters as a hiding place for money, concealed weapons or a flask. Also, in Stocking Filler scenes, the lead actress will most frequently wear black stockings with seams running up the back of the legs to conform with Rule of Sexy (in the real world, "nude" or flesh-toned is the most popular color for hose, and seams are very rarely seen except as decorations on special occasions). Actresses in movies and shows set in the 19th and early 20th centuries will also most frequently be seen wearing black or white stockings in Stocking Filler scenes, often with fancy decorations on the calves and ankles. In this case, it's Truth in Television due to the manufacturing and dyeing processes of the time (and social mores which prevented women from showing their legs but did wink at them flashing their ankles in flirtation or seduction).

When you see a Stocking Filler scene in a Period Piece, check what kind of garter the actress is wearing to see if the costume department has been doing their research work properly. Before the late 19th century, stockings were customarily held up by round garters, ribbons of various materials, or even simply rolled up at or above the knee. Garter straps (also often called suspender straps) were introduced as attachments to corsets during the Victorian Era, and garter belts in the modern sense came along during The Roaring '20s as skirts got shorter and corsets fell out of fashion, while flappers rebelliously rolled their stockings to just below the knee. Along with pantyhose, stockings with special elastic bands at the thighs were introduced during the 1960s. Also, thigh-length stockings were fairly uncommon before the late 19th century; most stockings were knee-length or extended just a couple of inches above the knee.

Most often revealed in a Lingerie Scene. Not to be confused with Silk Stalkings, an early '90s TV show (though there were several Stocking Filler scenes in that show), nor Filler, which may or may not include stockings.

See also: Zettai Ryouiki - this is when Stocking Filler goes higher than the knee and worn with a shorter skirt. See also: Playboy Bunny, for whom stockings or hose are an essential element of the outfit. See also: Proper Tights with a Skirt. Compare Victoria's Secret Compartment for another use of underwear to conceal objects.

Comic Books
Films — Live-Action
Video Games
Western Animation
Note: Fishnets are rarely seen in cartoons because they're difficult to animate without the Unmoving Plaid problem, though a few examples do exist.

When Bond is approached by Paris Carter, the two talk about their past together before passionately embracing, followed by Bond slipping Paris's dress off her, leaving her in just her pantyhose.

When Bond is approached by Paris Carter, the two talk about their past together before passionately embracing, followed by Bond slipping Paris's dress off her, leaving her in just her pantyhose.