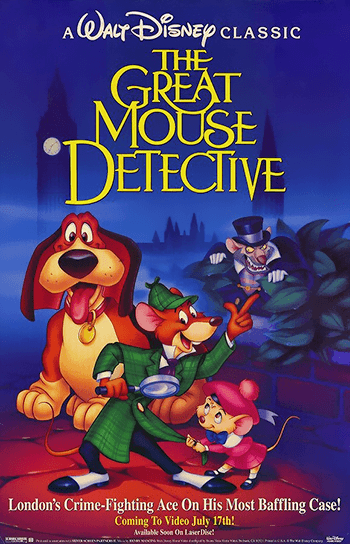 A 1986 Disney Animated Canon film (Number 26) with no Medieval European Fantasy setting, no True Love's Kiss, and no princesses (although there is a mouse version of Queen Victoria...) More importantly, the film's major success, both with critics and at the box office (though it didn't make much cash as An American Tail), after the failure of The Black Cauldron convinced the new senior management of Walt Disney Pictures that their animation department had a future after all and it should be noted that this film actually saved Disney from going bankrupt, similar to what Cinderella and 101 Dalmatians did, back in 1950 and 1961, respectively.

This Animated Adaptation of Basil of Baker Street, a series of children's books by Eve Titus, tells a story of Sherlock Holmes in a Mouse World. When toymaker and mechanical genius Hiram Flaversham is kidnapped, his daughter Olivia hires the greatest detective in all mousedom, Basil of Baker Street, to find him. On her way, she is found by the Narrator and Dr. Watson's Captain Ersatz, Dr. Dawson, just back in London after serving overseas in the military. Basil is reluctant to take the case until he realizes the bat who kidnapped Olivia's father works for his Arch-Enemy, the Diabolical Mastermind Professor Ratigan (Vincent Price).

With the help of his trained hound, Toby, Basil tracks the bat to a human toy shop, but he escapes and kidnaps Olivia. Ratigan uses her to force her father to complete a robot duplicate of the mouse queen as part of his Evil Plan to take over the kingdom, which he would use to declare him the Queen's Royal Advisor and turn him into the Kingdom's 'shadow ruler' by "suggesting" various laws and actions which the "Queen" would then approve of. After learning Basil is on the case, the Evil Genius decides to use this as an opportunity to humiliate and defeat his rival once and for all. Basil falls for his trap hook, line, and sinker and, with some encouragement from Dawson, narrowly escapes the Death Trap in enough time to save the queen and engage Ratigan in a Chase Scene by air that culminates in a gruesome Monumental Battle at Big Ben.

The film was the directorial debut of John Musker and Ron Clements (here credited alongside Burny Mattinson and Dave Michener), who'd go on to direct the film which properly kicked off the Disney Renaissance, The Little Mermaid, three years later, afterwards becoming the studio's most prolific directing team for the next thirty years with Aladdin, Hercules, Treasure Planet, The Princess and the Frog and Moana. This is also the final film to have any involvement from the Nine Old Men.

open/close all folders
#-C
D-F
G-L
M-R
S-Z
Goodbye, so soon, and isn't it a shame?
We know by now that time knows how to fly
So here's goodbye, so soon, we'll go our separate ways
With time so short I'll say so long and go
So soon, goodbye!
Feedback

Dawson and the Rude Lady

In a movie where almost everybody smokes, this trope was bound to happen to one of the protagonists...

Dawson and the Rude Lady

In a movie where almost everybody smokes, this trope was bound to happen to one of the protagonists...