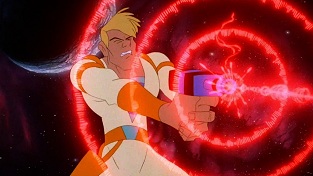 Underlighting (aka "Bipack Glow") is an animation technique that caught on in the 1980's, although it dates back much further.

Some parts of an animated scene may need to glow. Traditionally, a glow was painstakingly drawn by an animator, who had to pay careful attention to get the fringe colors just right to make it convincing. Even in the best cases, a hand-drawn glow still didn't look very "glowy."

There were, however, two big drawbacks to this technique. First of all, it was somewhat labor-intensive, as the hole in the animation background would have to move to track where the glow was supposed to be frame by frame; as a result, underlighting would typically be relegated to static background elements if needed for a prolonged portion of the animation, with underlit moving objects typically being on the smaller side to reduce the workload for the animators. And second, adding texture to glowing objects was much more difficult compared to hand-painted glow effects, though not outright impossible; typically texture was added by placing a translucent foil or a glass tube filled with a mix of soap/shampoo, water, and glitter between the background and the backlight. This second drawback meant the technique was used primarily for amorphous objects such as "energy beams" or lightning.

Underlighting eventually faded out as digital ink and paint software became more accessible to animation studios in the late 1990's and early 2000's, with these computer programs allowing animators to more easily produce glow effects and give them levels of texture and flexibility not previously possible with cel animation. Among live-action producers, the rise of CGI also rendered underlighting obsolete for similar reasons in regards to producing energy effects and whatnot, though with the added benefit of CGI allowing these same kinds of effects to more believably mesh with the live-action footage. However, in the context of hand-drawn animation, creating the exact kinds of glow effects underlighting provided through digital technology is excruciatingly difficult, due to the unexpectedly complex nature of real-world light requiring a large amount of legwork in realistically replicating tapering fringes on a frame-by-frame basis (to say nothing of how light refracts against foils and glitter fluid). Consequently, underlighting-esque effects have largely died off in this field, rendering it a de-facto Forgotten Trope.