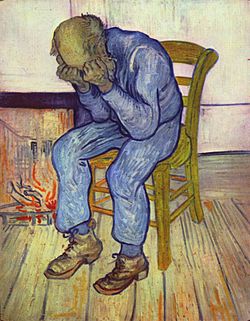 "Do sit down, Sergeant. Shocks are so much better absorbed with the knees bent."
— Lord Summerisle, The Wicker Man (1973)
Advertisement:

Everything seems to be going according to plan. There are some risks of failure but you are confident that everything will turn out okay. Maybe it's just a normal day for you when Alice comes in. "Oh, how nice! I wasn't expecting company. Do you want me to fix you some tea? ... Why do you want me to sit down? What?! Jimmy's dead?! I think I need to lie down..."

That's right. This is a very specific example of a Heroic BSoD or a Villainous Breakdown. It involves a chair, couch, rock, etc. as a plot device. It shows that the person is so shocked by the revelation that they can't keep standing. Maybe they hit the Despair Event Horizon. Maybe the Shell-Shocked Veteran has reached his limit. Maybe someone gave them an Armor-Piercing Question. This may lead to a Get a Hold of Yourself, Man! or Quit Your Whining.

This may overlap with Contemplative Boss. This trope is about having to sit or lie down due to emotional stress. This may lead to a Big "NO!" This is Truth in Television since this is a common reaction to stress. This is not about the fact that People Sit on Chairs. Compare Troubled Fetal Position. This may be used alongside a Dramatic Drop.

In extreme cases, the effects will cause the character to Faint in Shock instead of just sitting or lying down.