Animation / We Can't Live Without Cosmos 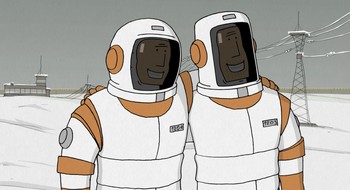 We Can't Live Without Cosmos is a 2015 animated short film (12 minutes) from Russia, by Konstantin Bronzit.

Two young men, best friends from childhood, are both trainees in the Russian—or Soviet, the time frame is vague—space program. The two men, known only as trainees 1203 and 1204 (and distinguishable by little more than the fact that 1203's head is square-shaped while 1204's is elongated), are roommates and partners in cosmonaut training camp. They zip through training with ease, graduate at the top of their class, and become cosmonauts. A joyful 1203 is launched into space, with 1204 as his backup on earth. Then tragedy strikes.