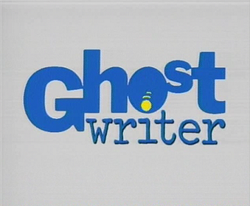 Ghostwriter! (Word!)
"He's a ghost, and he writes to us: Ghostwriter."
— Jamal Jenkins, Ghost Story
Advertisement:

Surreal, quirky mystery/educational series created by Sesame Workshop and aired on PBS and The BBC from 1992-1995. A group of middle-school kids in Brooklyn, New York are the only ones who can see a benevolent, amnesiac ghost, whom they dub Ghostwriter. He can only see and communicate through writing, and uses his abilities to help the kids solve mysteries. The show never made it clear who Ghostwriter was, or why he chooses to help people. Although some episodes implied that the ghost retained more memories than he claimed to, Ghostwriter's true identity was never revealed.note That is, until a 2010 interview revealed that he was a runaway slave that was killed while teaching other runaway slaves how to read.

His abilities, by contrast, were extremely well-defined. For example, when the kids take a comic book as evidence, Ghostwriter can't see anything in it except the speech balloons. His spying often made the perp obvious very quickly, but the kids then had to find other evidence that would be admissible in court — with a few exceptions. Each mystery was a four-part episode, except for the premiere "Ghost Story" and "To The Light," which were five-parters.

Presumably because of PBS censorship codes, almost all violence on the show happened off-camera. This made the show painfully slow and talky most of the time, but some scenes were scary nail-biters. For instance, in the "Who Is Max Mouse?" climax, the only chance the heroes had to solve the case was making a high-stakes bet with the perp, and losing it would result in a guaranteed prison term for one of the kids. In an equally scary arc, one of the kids suffered chemical poisoning from improperly discarded dry-cleaning chemicals near a playground that the characters frequently visited and her friends discover in their research that the effects of this poison are potentially lethal. The villains ranged from eccentrics to raving nutcases, and were fascinating — too much so, as they made the heroes look bland. Some episodes managed elaborate mysteries without any villain at all.

Although very popular, the show was expensive to produce (it shot on-location in NYC), and with increasing public funding cuts as The '90s wore on, PBS could no longer afford to foot the bill, even with the help of Viewers Like You. It didn't help that the BBC pulled out of co-producing the show by the third season.

If you're looking for the trope that could have gone here, see Playing Cyrano. Not to be confused with a literary Ghostwriter, defined by That Other Wiki as "a writer who writes books, articles, stories, reports, or other texts that are officially credited to another person" (which frequently overlaps with Extruded Book Product). Also not to be confused with the film The Ghost Writer.

A reboot of the series began airing on the Apple TV+ streaming service on November 1, 2019.